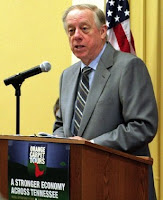 Experts agree that regional cooperation can spur economic development in rural areas, but getting counties that have long been rivals on the football field, the basketball floor and the job-chasing circuit takes some doing. Tennessee Gov. Phil Bredesen is doing it, or at least trying to, and took his program on the road this week. (Photo from The Leader, Covington)

"The program is designed to acquaint veteran site selectors with development opportunities in Tennessee's rural communities and to give those communities the opportunity to gather feedback from veteran business consultants," reports Gary Nelson of the tri-weekly Crossville Chronicle, who covered Bredesen's "Orange Carpet Tour" stop in an adjoining county. Bredesen's program also "includes an expanded series of tax incentives for companies investing in rural communities with historically high unemployment and the Rural Opportunity Fund, a new source of capital available to rural Tennessee businesses."

Nelson reports that the mayors of three adjoining counties on the somewhat mountainous Cumberland Plateau "signed a memorandum of understanding requiring the counties to provide preliminary data for the Orange Carpet Tour, present an economic development project presentation to the site-selection consultant in order to receive suggestions and feedback, seek out opportunities for regional collaboration, work with [state] regional jobs development specialists and community development specialists to implement action items identified by the site selection consultant, and submit quarterly reports ... regarding progress of implementing action items identified during the Orange Carpet Tour. The reports must be available for a period of two years."

"Officials say some counties were reluctant to sign on to the Orange Carpet program because the agreements require local governments to try to implement any improvements recommended by the consultant," The Associated Press reported. But Cumberland, Morgan and Roane counties "have already entered into the Plateau Partnership Park on a piece of land in the three counties consisting of more than 1,000 acres," Nelson reports. (Read more) The area is near an airport and an Interstate 40 interchange.

Bredesen made four other stops to recognize tri-county groups: Clay, Pickett and Fentress in north-central Tennessee; Coffee, Franklin and Lincoln in east south-central; Lewis, Wayne and Lawrence in west south-central; Lauderdale, Haywood and Tipton in the west. For his news release on the tour, click here.