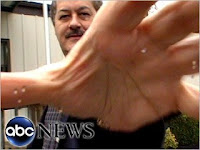 "Massey Energy Co.’s chief executive threatened to shoot an ABC News producer and tore his shirt collar when the newsman made an unannounced attempt to interview him in a parking lot at his office in Belfry, Ky., a network spokesman said Thursday. But CEO Don Blankenship (above, in ABC image) said the scuffle happened after the producer put a camera too close to his face," writes Tim Huber of The Associated Press.

ABC said Blankenship told producer Asa Eslocker, “If you’re going to start taking pictures of me, you’re liable to get shot.” Network spokesman Jeffrey Schneider said Blankenship grabbed Eslocker's camera "and snapped off a microphone before putting his hands to the man’s throat and tearing his shirt collar," Huber writes.

ABC said it plans to air a report Monday about Blankenship's relations with the West Virginia Supreme Court, which ruled in Massey's favor yesterday in a $76 million contract dispute. In the 3-2 vote, the justice Blankenship elected with a multimillion-dollar campaign in 2004 voted with him, notes Paul Nyden of The Charleston Gazette. For ABC's story on the incident, click here. For its slideshow of the encounter, click here.
Written by Al Cross Posted at 4/04/2008 09:21:00 AM