Daily editor leaves corporate journalism for his and his wife's own, 'mostly unfettered' weekly in N.Y.

Jim Kevlin, who wrestled with newsroom budgets as a daily editor for 15 years, has a message for his former counterparts: "There is an alternative, an exciting one, where you can practice, mostly unfettered, whatever type of journalism you believe in." It's buying a weekly newspaper, as he did almost two years ago. 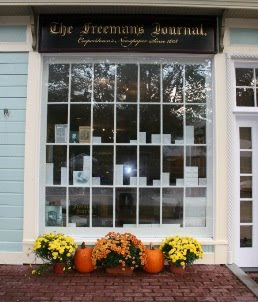 Kevlin, publisher of the Freeman's Journal in Cooperstown, N.Y., writes about his experience in the current edition of American Journalism Review. Chris Stadelman, editor and publisher of the weekly Parsons Advocate in West Virginia, tells us his experiences after daily journalism were eerily similar. Much of the story is about the business aspect of the paper, which now has a circulation of 2,500, up from 1,800 when he and his wife bought it. (Photo of paper's storefront from its Web site)

"Coming out of the newsroom, much of the work — ad sales, distribution, bookkeeping — was new to me," Kevlin writes. "It was exciting to find that the survival skills developed by the harassed and haggard daily editor — strategizing, adapting, budgeting, schmoozing and occasionally acting on a creative idea or two — were transferable. ... To set an interviewee or a shopkeeper at ease, you need to establish common ground. But none of that speaks to the joy of weekly newspapering. Foremost, this is pure journalism. You can cover what you want the way you think it should be covered. You can free yourself from the corrosive union that's developed between journalism and marketing — two warring animals — in the past quarter-century. To the degree you can tolerate the consequences, you can speak truth to power."

Ah, yes, to the degree you can tolerate the consequences — the ever-looming link between news and the business side, always closer in community journalism. Kevlin writes, "Often, you can put a price tag on an editorial decision. One potentially major advertiser, for instance, wants access to the news columns as well. That was a $2,000 decision to say no. The jingoists are right: Freedom isn't free. I can put a dollar value on what it's cost me to exercise the First Amendment — but it's been worth every nickel. And the paper is profitable, we're making a living and in five years we'll have the note paid off." (Read more)
Written by Al Cross Posted at 4/05/2008 10:17:00 PM