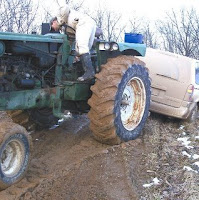 Iowa's rural roads are so bad -- mud is actually stopping mail service and keeping students from getting to school -- that the state Farm Bureau is asking the legislature to raise fuel taxes, even at a time of record fuel prices. (Photo by Brian Chambers, Albia Newspapers)

"Secondary roads in Iowa always get a little soft and gooey this time of year as the ground thaws and temperatures rise," writes Dien Judge of the Iowa Independent. "But the brutal winter that Iowa just endured seems to have created a perfect storm for country roads around the state. Now many rural Iowans have been left stuck in the mud. For several weeks in March, many rural roads in southern Iowa were literally impassable."

State Rep. Richard Arnold, former chair of the state House Transportation Committee, told Judge, "A lot of our roads are in bad shape, not just the rock roads. But for the past few years the highway commission has put a lot of the Department of Transportation money into building bypasses around larger cities. They've forgotten about us out here." (Read more)
Written by Al Cross Posted at 4/03/2008 05:30:00 PM