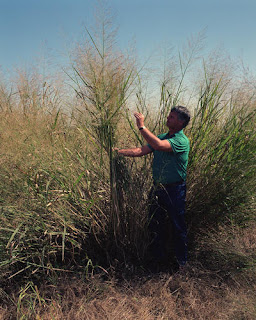 New studies suggest switchgrass may become a valuable source of renewable energy in the U.S. From the Great Plains to the Southeast, much research is determining just how effectively switchgrass grows and can be converted to energy. Early results suggest that switchgrass may prove more attractive than corn.

"Switchgrass has been touted as the next miracle crop of the renewable fuel industry," writes Greg D. Reber of the Telegraph Herald of Dubuque, Iowa. "It's a fast-growing variety of prairie grass that once grew wild across the United States.

Aside from being converted to ethanol, switchgrass can be burned along with coal to create energy. "Switchgrass helps utilities meet clean-air standards with less-expensive control equipment and reduces greenhouse air pollution from a large carbon dioxide source," adds Reber. "A dry ton of switchgrass has about 16 million British Thermal Units per dry pound, 90 percent as much energy as a ton of coal, but it burns much cleaner."(Read more)

Ray Smith, a forage specialist with the University of Kentucky, is conducting research in Eastern Kentucky to show local farmers the advantages of switchgrass. John Flavell of the Daily Independent in Ashland writes, "Stopping short of calling switchgrass a 'super plant,' Smith said the plant comes as a complete package, because it’s very drought resistant, uses little fertilizer and needs only one cut a year. The field research by Smith in Kentucky, and others in the Great Plains, is an attempt to build on decades of studies that had shown initial promise with switchgrass. The plant has been increasingly touted as one of the ways to wean the country from foreign oil by converting it to ethanol and a way to help sequester carbon in the ground." For Flavell's story and his nice slideshow, click here.
Written by AWM Posted at 9/29/2008 11:20:00 AM