For 27 years, photojournalist Bill Hess has lived in Wasilla, Alaska, which few Americans had heard of until its former mayor became the Republican nominee for vice president of the United States. Bill has been posting his photographs on blogs for some time, but with Wasilla much in the news he has broadened his agenda. His new blog is called Wasilla by 300, meaning its scope is a 300-mile radius of the town, "perhaps the most wild, dramatic, gorgeous, beautiful section of land and sea to be found in any comparable space anywhere on Earth." It includes Wasilla's sister city of Palmer, where Hess took the Alaska State Fair photo at left.

"Wasilla is not the quintessential small American city that it has recently been built up to be since former Mayor Sarah Palin was chosen by John McCain to be his running mate. Yet -- Wasilla is my home and if I am lucky it will be until I grow old and die," Hess writes. "Wasilla is a sprawling community that has been slapped down hodge-podge upon what was so recently wilderness of the most exquisite beauty. In its design, it is deliberately anti-zoned, anti-planned. In the building of Wasilla, the desire to make a buck has trumped aesthetics and all other considerations. This town, built in the midst of exquisite beauty, has largely become an unsightly, unattractive, mess of urban sprawl." 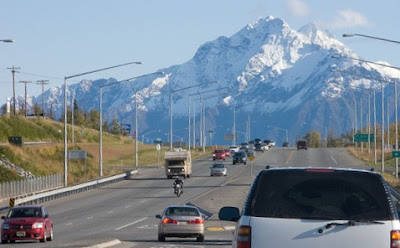 Many of Hess's Wasilla photographs are "grab shots," taken as he drives around the area, like the one above. "Despite the odd, random, nature of the images, I believe they communicate something powerful about this town that I have never seen expressed anywhere else," he writes. "if one were to search hard enough, it might just be possible to find a sense of community here, and a town soul. So, using my skills as a photojournalist and a writer, I hope to do just that. If this place has a sense of community, I will find it. If there is a town soul to Wasilla, I will document it." Hess also has a site that displays his professional work, here.
Written by Al Cross Posted at 10/04/2008 09:23:00 PM