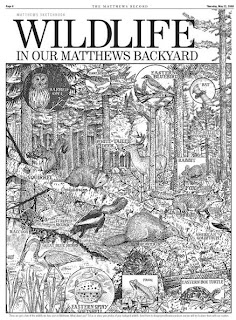 Jim Denk knows the work involved in running a small-town newspaper. Although he and his wife, Janet, employ just a few part-time workers at The Matthews Record, the local newspaper they bought a few years ago, they still end up doing everything from writing to selling advertising to delivering the papers to the post office in the North Carolina town of 28,000 near Charlotte.

Those responsibilities alone are enough to keep the couple very busy, which makes the stunning visuals created by Denk all the more impressive. He is creating a lot of buzz in the journalism community for the detailed graphics he creates for the weekly.

In an interview, Denk told Sara Quinn of the Poynter Institute about his work. For example, he found that wildlife issues were important in his community. So, he says, "I created an illustration of a forest, the way it looks in North Carolina. I put everything in it that I've ever seen there. Like salamanders to frogs. I did the research on the frogs, what kind they were. Turtles to deer to barred owls. That was fun." His illustration appears above.

Denk, who has worked for The Charlotte Observer and the Detroit Free Press, is extending his graphic work to advertising. "At first, I thought creating the ads would be just one more production thing to do," he says. "But, I'm already looking at it like it's the next challenge for me." (Read more)
Written by Jen Green Posted at 10/01/2008 09:39:00 AM