Rural areas are being hit hard as the airline industry suffers a financial crunch and reduces its capacity, as shown in the chart from OAG Analytical Services, which monitors airline schedules. OAG, part of Official Airline Guide, reports that 36 airports that had commercial flights last year will not have them this fall. 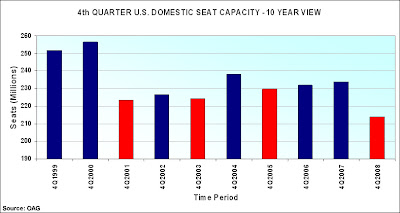 "Big airlines say they simply have been eliminating their least profitable routes, not running away from discount airlines," Scott McCartney writes in "Middle Seat," his column for The Wall Street Journal. "What isn't known is how much demand for travel will disappear this fall if fares are higher and the economy weakens further." "When discounters enter markets and force all airlines to cut prices, traffic increases exponentially -- the Department of Transportation once labeled that stimulation 'the Southwest [Airlines] Effect.' Yet now the reverse may be true -- higher prices and less competition may reduce passengers by percentages even bigger than the capacity cuts." (Read more)
Written by Al Cross Posted at 10/02/2008 10:56:00 AM