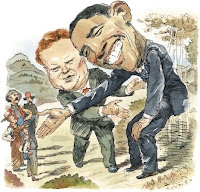 The latest reportorial take on Barack Obama's prospects in the potentially pivotal state of Virginia, which may pivot on the votes of whites in the rural southwest corner of the state, comes from one of the best, Peter J. Boyer of The New Yorker. His 4,600-word story is titled "The Appalachian Problem," so it's also about West Virginia, Pennsylvania and Ohio, which collectively could decide the presidency. As Boyer perceptively notes, Southwest Virginia has "small hill towns that are nearer, in mileage and in spirit, to the old factory town of Ironton, Ohio, than to the glass office towers of northern Virginia."

At Lebanon High School in the coalfield on Sept. 9, Obama delivered "a performance that was as populist in theme and as personal in style as a Harvard lawyer could credibly deliver," Boyer reports. But it also included the "lipstick on a pig" line that John McCain's campaign said was a slap at Republican vice presidential nominee Sarah Palin. "Obama’s Virginia début as a rousing populist was hardly noticed nationally, having been overwhelmed by the kind of controversy that has come to characterize this campaign," Boyer writes. The speech included this passage on guns, which Boyer renders verbatim:

“I just want to be absolutely clear, all right? So I don’t want any misunderstanding, so that when we all go home and you’re talking to your buddies, and they say, ‘Aw, he wants to take my gun away,’ you heard it here. . . . I believe in the Second Amendment. I believe in people’s lawful right to bear arms. I will not take your shotgun away from you. I will not take your rifle away. I won’t take your handgun away.” Obama said he was for “common-sense gun-safety laws,” and repeated again, “I am not gonna take your guns away. So, if you wanna find an excuse not to vote for me, don’t use that one, because that just ain’t true. It just ain’t true!”

Obama's speech won "cascading cheers," Boyer reports. "But it was for a largely partisan crowd, which had come to the event already convinced, and it was hard to guess how it would play outside that gym." To help him figure that out, he paid the obligatory visits to David "Mudcat" Saunders, "who has made a profession of selling Democrats to rural Virginians," and U.S. Sen. Jim Webb (in illustration by John Cuneo), who has written a book and many articles about his Scots-Irish heritage, which largely defines the region. The story is as much about these two Democrats as Obama; they say his prospects there are less about race than most observers think, and more about culture.

Saunders "worries that Obama seems too professorial, too detached, to make headway with rural voters," Boyer reports."Obama’s 'Change' message, Saunders argues, is too abstract, too vague, for the region." Mudcat, typically, is profane: “Those people you were with today were screwed by the English in Scotland and Ireland way before they came over here and started getting screwed. They’ve been screwed since the dawn of time. And you know what? You ain’t gonna do anything with them, talkin’ about change. You know why? We’re all changed out. That’s all you ever hear, every election. Somebody’s gonna change some shit. Nothin’ ever changes." (Read more)

Meanwhile, Bluegrass music legend Ralph Stanley, long an active Democrat, is on the air with a radio ad for the Obama campaign, aimed at his home Southwest Virginia, The Associated Press reports. In a touch of irony (intended?), as Stanley speaks, a recording of his and his brother Carter's classic "Rank Stranger" plays in the background.
Written by Al Cross Posted at 10/03/2008 06:13:00 PM