From 2003 to 2008, poverty grew twice as fast in rural counties as it did in metropolitan areas

New census data show the number of Americans living in poverty increased by 3.2 million between 2003 and 2008, with a disproportionate increase in rural areas. Rural counties were home to just 16 percent of the U.S. population in 2008, but accounted for 33 percent of the increase in poor Americans between 2003 and 2008, Bill Bishop of the Daily Yonder reports. A two-person household was defined as poor if it had an income less than $14,051, and a four-person household had to have an income less than $22,025.

The Daily Yonder has assembled an excellent resource for journalists with the 2003 and 2008 data for each county in a spreadsheet. We used that data to assemble a list of the 20 counties where the percentage of the population in poverty increased most from 2003 to 2008. Note that 18 of them were rural. 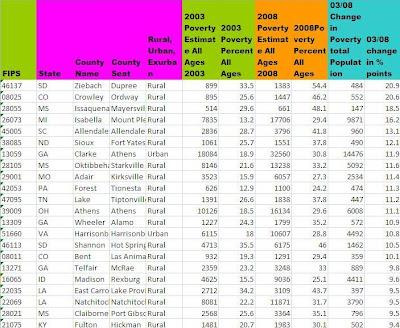 The rural counties with the lowest poverty rates were found predominantly in the Mountain West, Bishop reports. Ski-resort counties like Tenton, Wyo., and Pitkin, Colo., seemed immune to the poverty rate increase. The poorest counties from decades ago remain mostly the poorest counties today. Counties in Appalachia, the Mississippi Delta, South Texas and those dominated by Native American tribes still retain some of the highest rates. (Yonder map) 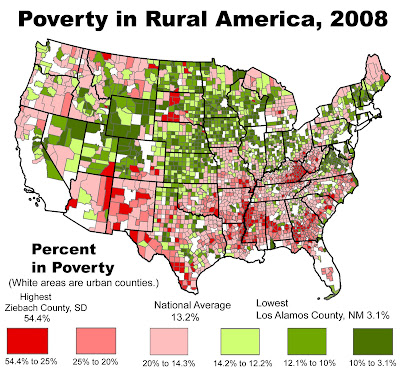