Tasty Thanksgiving leftover: Interactive maps show which recipes were sought most or least, by state 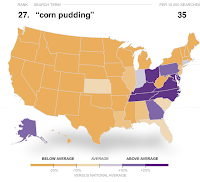 Kentucky is the corn-pudding capital of America, and its mother state, Virginia, is runner-up. But in West Virginia, the traditional Thanksgiving dish seems less popular than nationwide, based on geographic counts of search terms typed into Allrecipes.com, as reported by Kim Severson of The New York Times.

Kentucky is also the leader in broccoli casserole. Green bean casserole is most favored in Montana, Wyoming and Nevada. Sweet potato pie is clearly a delicacy of the old Confederacy, but pecan pie is by far an Arkansas concoction. And the most interest in pecan pie is found in Utah. Of course, because these rankings are based on searches, they don't include people who already know a recipe. Maybe that's why the Southeast ranked below average in searches for "sweet potatoes." But the Times has assembled a great interactive map showing the top 50 search terms, state by state.
Written by Al Cross Posted at 11/26/2009 11:28:00 PM