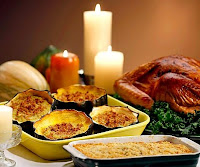 Thanksgiving dinner has become a nationwide tradition, but it may look very different from place to place. Thanksgiving spread from New England in the mid-19th Century partly with with the hope the observance would help ease harsh feelings between the North and South, Charles Perry of the Los Angeles Times reports, but the whole country didn't immediately latch on to the holiday. (Times photo by Kirk McKoy highlights stuffed acorn squash)

Many Puritan New Englanders refused to celebrate Christmas, citing the lack of a scriptural warrant for Dec. 25 as the date of the birth of Christ, until the 19th Century, so Southerners initially distrusted Thanksgiving as some sort of "bogus Yankee imitation" of Christmas, Perry writes. That initial distrust is just one of the reasons Southern Thanksgiving has become a rather distinctive meal. Red meat like ham or roast beef is often served alongside turkey in the South, and side dishes like cornbread stuffing, sweet potatoes with pecans, macaroni and cheese, potato salad and ambrosia have become Southern Thanksgiving facets.

The Midwest meal may feature sweet potatoes topped with marshmallow, boiled squash or any number of German and Scandinavian influences, Perry reports. In the Pacific Northwest, the 19th century craze for oysters is still prominent in Thanksgiving meals. The only dishes you're almost guaranteed to see on the dinner table Thursday across the country are turkey and cranberries, so don't expect those to vanish anytime soon. What will Thanksgiving look like by 2019? Perry answers, "My guess is it won't be a complete free-for-all of eclecticism, because families need traditions, and so do countries." (Read more)
Written by Jon Hale Posted at 11/23/2009 09:46:00 AM