Something we can all give thanks for: A man is free because a journalist and a newspaper cared 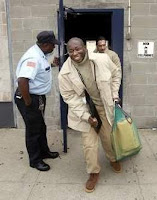 One of the most thankful Americans tomorrow may be Lebrew Jones, and he is doubtless grateful to a journalist, Christine Young of the Times Herald-Record in Middletown, N.Y. She thought he was wrongfully convicted for the murder of a Manhattan prostitute, and her reporting led to his release on parole last week. "In a decision that one legal expert called 'basically unheard of,' the state granted him parole after his first interview," Steve Israel of the THR reported. (THR photo by Chet Gordon)

Al Tompkins of The Poynter Institute has been following this story for a year or more, highlighting the "remarkable multimedia presentation" the 70,000-circulation newspaper assembled. She told him in an interview, "This story cost the newspaper a small fortune, and Derek Osenenko, the executive editor, and Joe Vanderhoof, the publisher, could have spiked it and didn't, just because they wanted to do the right thing. How great is that? How rare is that in a for-profit business?"

Asked how she was feeling about the role of journalism these days, Young (right) said, "It is the foundation of our freedom. It is under-appreciated and shamefully undervalued, even by the leaders in our profession, and that breaks my heart. As for journalism and justice, the world is filled with injustice, and the joy of being a journalist is being blessed with the opportunity to right it, even once." Amen, and amen. We are thankful for Christine Young and journalists like her.
Written by Al Cross Posted at 11/25/2009 04:50:00 PM