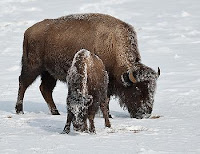 Wild bison do not deserve Endangered Species Act protection, says the U.S. Fish and Wildlife Service. The announcement came following the conclusion of the agency's 90-day review of a petition by private citizens James and Natalie Bailey to list the wild plains bison as threatened, Environmental News Service reports. "Based on our review," said FWS, "We find that the petition does not present substantial information indicating that listing may be warranted." (Photo by Jim Patton)

Wild plains bison are estimated to number 20,500 in 62 conservation herds, and the herds' recent population trends appear to be stable or slightly increasing, FWS says. "In 2010, the nonprofit Center for Biological Diversity sued the service for failing to respond to the petition to list the bison and other petitions to list dozens of species as threatened or endangered under the Act," ENS reports. Noah Greenwald, endangered species director for the center, called the decision not to list bison as threatened a "complete farce."

Greenwald said the agency had chosen to look only at the species' current range and ignore the fact that wild plains bison are almost completely absent from their historic range. "The Fish and Wildlife Service has turned a blind eye to the tremendous loss of our iconic bison from the North American landscape," he said. "This see-no-evil, hear-no-evil approach is entirely inconsistent with the broad purposes of the Endangered Species Act, and we will certainly challenge this absurd finding." About 500 bison are being held captive at Yellowstone National Park to prevent them from entering Montana, where brucellosis, a disease that causes elk, cattle and bison to prematurely abort their young, is prevalent. (Read more)
Written by Jon Hale Posted at 3/01/2011 04:38:00 PM