Pressure on U.S. corn farmers may be at an all-time high as they prepare to plant this summer's crop. "Those huge surpluses of corn that Americans have taken for granted for generations are gone," Dan Piller of the Des Moines Register reports. "The amount of U.S. corn is expected to shrink to scarcely more than a week's supply by late summer, reduced by a smaller crop last year and record demand from ethanol plants and other countries." Any problem with this year's crop could send prices to unprecedented double-digit levels. 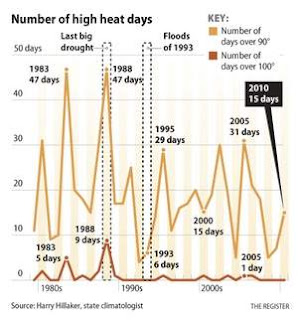 "This year there is no margin for error. We especially can't have bad weather," said commodity trader Don Roose of US Commodities in West Des Moines. Any problem with the crop could lead consumers to see soaring prices at the grocery store because livestock producers may reduce their herds in the face of high feed costs. "Prices much higher than the $7.50 per bushel that corn sold for last week could force Iowa's 41 ethanol plants to shut down to avoid excessive feedstock costs, threatening up to 5,000 jobs," Piller writes.  (Register graphic)

Anxiety over the U.S corn crop was high in 2008 and 1993 after huge Iowa floods and in 1998 during a midsummer drought, but experts say this year is different. The U.S. Department of Agriculture projects a surplus of 675 million bushels of corn by the end of the summer before the new harvest, the lowest surplus in 15 years and second smallest in 74 years. "We've never had a situation this tight right at the beginning of planting," Iowa State University economist Chad Hart told Piller. "Even if we get a really good crop this year, it will just meet the expected demand." (Read more)
Written by Jon Hale Posted at 4/19/2011 03:24:00 PM

More grass fed beef is the answer. More and more is showing up in MO. I've also seen more traditional family farms with small herds of pigs, about 5 or 6 animals each, this spring and I know farm families who have added a milk cow to the beef herd and have cleaned out and reactivated the chicken coop. More and more farm families are raising more and more of their own food. They also are marketing their surplus to neighbors and friends. The rest of us are getting on the bandwagon when and where we can. My 30x70 garden is already partly planted.