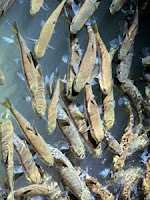 Fish habitats in streams and rivers across America are in danger, says a new report by the National Fish Habitat Board: "Almost 40 percent of the nation's freshwater fish species are considered at risk or vulnerable to extinction. Habitat loss is the most common cause for extinction of freshwater fish in the United States over the past century; many saltwater fish are also in decline due to habitat degradation."

In a statement released by the Fish and Wildlife Service, acting Director Rowan Gould said, "This report clearly illustrates the need for strategic use of existing resources through partnerships that can identify the most effective use of funds and help the nation as a whole make progress in fish habitat conservations." Laura Petersen reports for Land Letter that the habitat board plans to release assessments every five years and fill in the missing data from the original report. (Read more)

Click here to view an interactive map of risk of current habitat degradation for streams and coastal fish habitats across the U.S. "In the Northern Plains region, which includes Nebraska and the Dakotas, 6 percent of the waterways are at "very high" risk of degradation," Cody Winchester reports for the Argus Leader in Sioux Falls, S.D. The fish habitat report attributes most of the degradation in the Dakotas to sediment and nutrient runoff from crops and irrigation channeling, and damage from cattle farming. (Read more)
Written by Deloris Foxworth Posted at 4/21/2011 05:08:00 PM