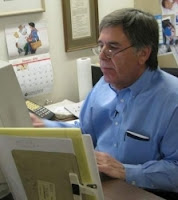 One year after Daniel Gilbert and the Bristol Herald Courier were honored with the Pulitzer Prize for Public Service, another rural journalist has been recognized by the Pulitzer board: Stanley Nelson, right, who has been working on an ongoing series about the murder of a black businessman during the civil rights era for the weekly Concordia Sentinel in Louisiana. He was announced as a finalist for the Pulitzer for local reporting when the award winners were announced this week.

Nelson's reporting identified Arthur Leonard Spencer as the person who killed Frank Morris, a well-liked black businessman in Concordia County (wearing cap in photo). You can see an index of Nelson's work here and our previous item about the package here. For the Pulitzer release, go here.
Written by Jon Hale Posted at 4/22/2011 04:38:00 PM