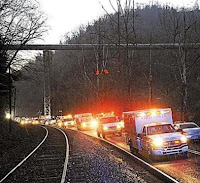 "The FBI has informed families of the miners who died at Massey Energy's Upper Big Branch Mine that they may be the victims of a federal crime," Ken Ward Jr. reports for The Charleston Gazette. "The FBI letter was dated March 28, but was not received by some families until earlier this week. A copy was obtained by the Gazette." Ward posted his copy here.

Little more than a year ago, 29 miners died in an explosion at the mine. "Victims of federal crimes are entitled to updates from the government about the status of their case, the right to be heard at certain court proceedings, and to protection from the accused," Ward notes, adding that investigators are also looking at potentially criminal activity at the mine "as far back as 2006." (Read more)
Written by Al Cross Posted at 4/22/2011 06:03:00 PM