The Patient Protection and Affordable Care Act was designed to make it easier for uninsured Americans to buy insurance at an affordable rate. But the exact opposite is happening in rural areas, where a lack of insurance providers has eliminated competition between insurance companies, leading to higher prices, Reed Abelson, Katie Thomas and Jo Craven McGinty report for The New York Times. In the roughly 2,500 rural counties served by the federal exchange, 58 percent have plans offered by only one or two providers, and people in 530 counties only have one choice for a provider. A state-by-state interactive map is available by clicking here.

"In rural regions, several factors combine to create a landscape that is inhospitable to newcomers," the Times writes. "Developing relationships with doctors and hospitals can be costly where cities and towns are widely scattered and the pool of potential customers is small." States such as Wyoming, with a population of 600,000, are in a difficult situation. Tom Hirsig, Wyoming’s insurance commissioner, told the Times, “I think the problem was that the Affordable Care Act was designed for where the majority of the people live, in the big cities where there’s a lot of competition among health care providers. You’ve got to have some bargaining chips, and we don’t have that much."

Many rural areas only have one hospital, "giving insurers little leverage when negotiating reimbursement rates," the Times writes. "Only one Wyoming county is served by more than one hospital, said Stephen K. Goldstone, the chief executive of WINHealth. In southwest Georgia, another rural region, Blue Cross and Blue Shield of Georgia is the dominant carrier, and it is the only insurer operating in 54 of the state’s 159 counties. Only one carrier, Highmark Blue Cross, is offering coverage in West Virginia, which has high rates of obesity and chronic diseases like diabetes." (Read more; NYT chart shows states on federal exchange) 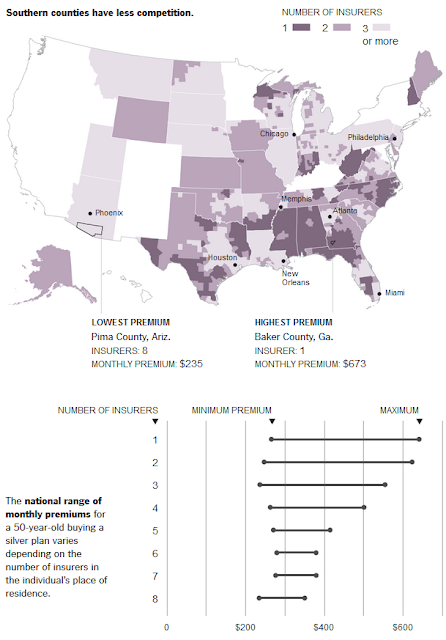