Okla. geologists issue warning about earthquakes, but the state's news media seem to ignore it

"Federal and Oklahoma authorities are warning that people in and around Oklahoma City are at much greater risk from earthquakes than they were four years ago, possibly because of oil and gas drilling-related activities," Mike Soraghan of EnergyWire reports. 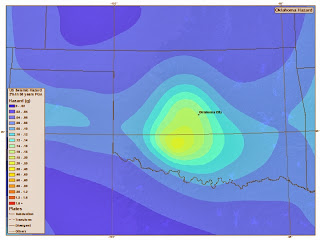 The Oklahoma Geological Survey joined USGS in issuing an "earthquake swarm" warning this week, which Soraghan calls "the closest any state official has come to saying earthquakes have been 'induced' by deep injection of wastewater from drilling," a major industry in the state. The agencies said "disposal" wells could be a contributing factor.

"If the idea was to get the word out in Oklahoma, it does not appear to have worked," Soraghan writes. "A search did not show that the statement was covered by general-circulation newspapers in Oklahoma or the state's television news outlets."

Injection wells have become more common with the advent of horizontal hydraulic fracturing, which uses high volumes of chemically-laced water that requires deep disposal. "More than 200 earthquakes of magnitude 3.0 or larger have rattled central Oklahoma since 2009, according to USGS," Soraghan reports. "That's about 40 a year. Before that, there were usually one to three a year." (Read more)
Written by Al Cross Posted at 10/25/2013 01:35:00 PM