Last year the number of people living in non-metro counties, the most common definition of rural America, declined for the first time since the Census Bureau began estimating populations. Population losses aren't anything new in the Mississippi Delta, where demography and economics caused 16 counties to lose between 10 to 38 percent of their population from 2000 to 2010—and 12 lost 50 to 75 percent since 1940, The Economist reports in a recent post on its "The Economist Explains" blog. (Commercial Appeal photo by Alan Spearman: Greenville, Miss., lost more than 7,000 residents in 2000-10)

The unnamed blogger answers the question, "Why are so many people leaving the Mississippi Delta?" Where the region differs from many rural areas is its history of agriculture and slavery and the mass migration of African Americans, who fled the South for the North in the middle of the 20th Century. "The Delta was built not just on agriculture but on slave labour—and lots of it," says the British magazine. "Slaves cleared the brackish, heavily forested floodplain and turned it into arable land. Slaves planted and reaped the cotton fields. After America's civil war, ex-slaves and their descendants provided a vast pool of cheap labour. Railroads into the Delta opened up new markets, but they also carried away workers looking for more opportunity to Chicago during the Great Migration, to military and defence industries during the second world war and to the industrial Midwest and north-east when America's car and steel industries were thriving." 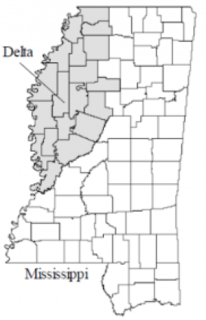 Agriculture is still a major commodity in the Delta, "but farms that once required hundreds of people have become mechanised," The Economist notes. As an example of struggling population, the news source cites Issaquena County, which in 1860 had a population of 7,224 slaves and 587 whites. The current population is 1,386, with 40 percent of those people living below the poverty line. In all, the county has 10 private non-farm business that employ only 99 people, which The Economist says is "a tax base that nightmares are made of and that functional schools and services are not." (Read more) Oddly shaped Issaquena County is the second southernmost county in the Delta (see map of Delta counties).
Written by Tim Mandell Posted at 10/21/2013 01:01:00 PM