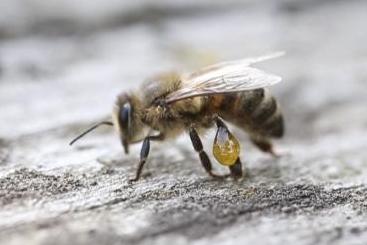 Minnesota regulators are considering banning or regulating neonicotinoids, a pesticide blamed for the deaths of large numbers of pollinators, including the loss of 40 to 50 percent of the honeybee population, Tony Kennedy reports for the Star Tribune in Minneapolis. Honeybees pollinate about 90 crops worldwide and pollinate more than $15 billion worth of U.S. crops. (Star Tribune photo by Renee Jones Schneider: A bee with resin on its leg)

"The possibility, disclosed this week by the state Department of Agriculture in a revised outline for a study of the chemicals, followed an outpouring of public concern over the dramatic decline in honeybee populations in recent years," Kennedy writes. "A revised outline published this week states that the range of state action could include 'restrictions on or cancellation of products.'” The in-depth review will take more than six months.

"Insecticide use in Minnesota is governed by both state and federal law," Kennedy writes. The Environmental Protection Agency "is also reviewing the effects of neonicotinoids on bees and other pollinators, while New York, Oregon, Canada and Europe all have placed bans or restrictions on them." (Read more)
Written by Tim Mandell Posted at 10/29/2014 01:49:00 PM