Researchers who took samples from Ohio's most heavily fracked county found that toxic pollutants levels are higher than what the Environmental Protection Agency considers safe for long term exposure, David Hasemyer reports for InsideClimate News. Researchers from Oregon State University and the University of Cincinnati found chemicals released during oil and gas extraction that can raise people's risk of cancer and respiratory ailments in samples from Carroll County, home to 480 permitted wells. 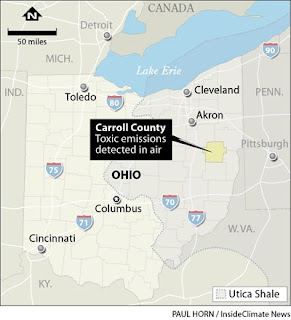 "Based on the data collected, researchers calculated the cancer risk posed by airborne contaminants in the Carroll County study areas," Hasemyer  writes. "For the worst-case scenario––exposure 24 hours a day over 25 years––they found that a person anywhere in the study area would be exposed at a risk level exceeding the threshold the EPA deems acceptable." (InsideClimate News map)

"The lifetime cancer risk in the study area estimated for maximum residential exposure was 2.9 in 10,000, which is nearly three times the EPA's acceptable risk level of 1 in 10,000, according to the study," Hasemyer writes. "The study mirrored other research conducted in heavily fracked areas of the country, including Texas and Pennsylvania, that have focused on volatile organic compounds." (Read more)
Written by Tim Mandell Posted at 5/21/2015 04:14:00 PM