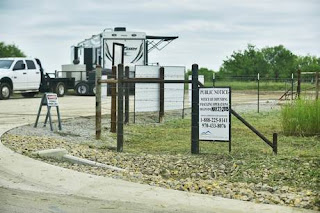 A Colorado energy company informed officials in Denton, Texas—which voted in November to ban fracking—that it plans to resume fracking in the city now that Gov. Greg Abbott signed a law "that limits the ability of Texas cities and local governments in writing local rules for oil and gas operators," Peggy Heinkel-Wolfe reports for the Denton Record-Chronicle. Employees for Vantage Energy told city officials the company plans to begin fracking on May 27. (Record-Chronicle photo by David Minton: A Vantage public notice announcing plans to resume fracking)

Denton Mayor Chris Watts, who said the law "likely prevents the city from blocking Vantage’s plans to finish the gas wells," told Heinkel-Wolf, “It’s my understanding we don’t plan on seeking an injunction . . . Where we go from here hasn’t been determined.”
Written by Tim Mandell Posted at 5/22/2015 01:22:00 PM