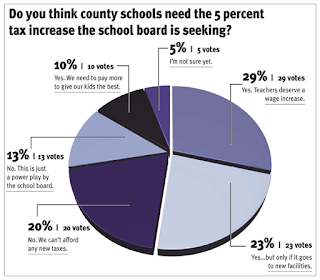 Our friend Ed Henninger writes a very good column for newspapers about design and layout on his site, and we recommend it to editors. Ed's latest column, about the value of running reader polls on opinion pages, has many good ideas, including the chart above (click on it for a larger version), but I think he left one out.

Reader polls are not the same as the public-opinion polls normally reported in newspapers and other media. The latter polls are based on some type of scientifically generated random sample and usually conducted under accepted standards designed to make the polls as reliable as possible—in other words, to be an accurate reflection of public opinion at the time they are taken.

Reader polls don't work that way. They are self-selected, meaning that the sample is determined by the people who want to give their opinion. Thus, they are not scientific and may not be an accurate reflection of public opinion. Most readers and viewers probably don't realize that, but news outlets rarely tell them. By failing to do that, the outlets are not being fully honest with them. 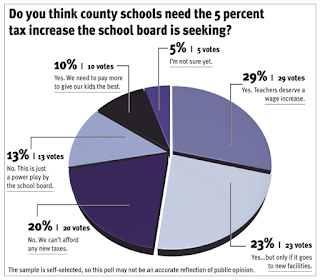 I recommend that any news outlet running a reader poll include this disclaimer or something like it: "Because the sample for this poll is self-selected, it is not a scientific survey and may not be an accurate reflection of general public opinion." Or, simply use this label: "Not a scientific poll." Or something that fits, as shown in the revised version of Ed's poll chart, above.
Written by Al Cross Posted at 5/19/2015 03:58:00 PM