Texas Republican Gov. Greg Abbott on Monday signed a law "that restricts how municipalities can regulate oil and gas drilling operations within their city limits," Marissa Barnett reports for The Dallas Morning News. The law, which goes into effect immediately, will "pre-empt cities from enacting a variety of other ordinances, including regulations on wastewater disposal wells, which numerous studies have tied to earthquakes." 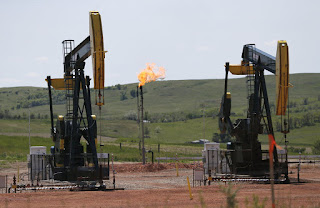 Residents in Denton voted in November 2014 to ban fracking, becoming the first city in the state to do so. The law will probably make that fracking ban impossible to enforce, Barnett writes. (Morning News photo: Denton)

Abbott said, “Oil and gas is already regulated at the state level by multiple agencies, at the federal level by multiple agencies. The last thing we need is an encroachment on private property rights at the local level . . . We’re ensuring that people and officials at the local level are not going to be encroaching upon individual liberty or individual rights.”

Critics say the law "is an affront to local control and prevents cities from picking up the slack where state regulation has failed," Barnett writes. "Under the law, municipal ordinances must be related to surface activity, must be 'commercially reasonable,' must not effectively prevent an oil and gas operation from occurring and must not be pre-empted by another state or federal law." (Read more)
Written by Tim Mandell Posted at 5/20/2015 02:04:00 PM