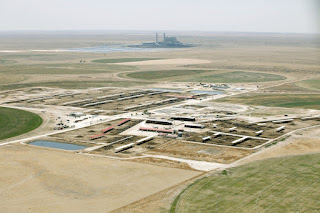 The U.S. Department of Agriculture has declined to investigate allegations from a watchdog group that some of the nation's largest organic egg and dairy farms are in violation of rules for organic agriculture, Peter Whoriskey reports for The Washington Post. (Cornucopia photo: A Texas organic dairy cited in a watchdog complaint)

The Cornucopia Institute says aerial photos it released in December prove that 14 organic operations are not allowing animals to engage in their natural behavior and have free access to the outdoors, Whoriskey writes. According to organic rules, "cows, goats and sheep are supposed to be able to get to pastures for grazing."

USDA, which said the five dairy farms and 14 chicken operations are in good standing, said the photographs are not evidence enough to warrant an investigation, Whoriskey writes. The operations, which supply stores such as Walmart, Target and Costco, according to the watchdog group, claim that the animals get outside but just happened to be inside when photos were taken.

Cornucopia officials, who said they will appeal the USDA decision, said the system is flawed because it allows organic farms to hire their own inspectors, and the inspections are typically announced long in advance, Whoriskey writes. Mark Kastel, co-founder of the group, told Whoriskey, "There's an inherent conflict of interest when you hire your own inspector. What Congress designed as a remedy was rigorous oversight by the USDA." (Read more)
Written by Tim Mandell Posted at 5/21/2015 04:09:00 PM