Chicken prices are based on a system with dubious accuracy, meaning consumers may be overpaying for the nation's most popular meat, Peter Whoriskey reports for The Washington Post. For decades prices have been based on the "Georgia dock" price, "calculated by the Georgia Department of Agriculture and based on the reports from eight anonymous chicken companies in the state. The companies are not asked to show receipts or other documentation proving that their figures are accurate." The estimated price, published weekly, determines consumer prices at many grocery stores. (Post graphic: Difference in prices between Georgia Dock and USDA estimates) 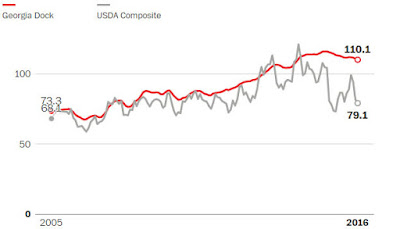 The U.S. Department of Agriculture recently stopped publishing the estimates in its official Market Report, Whoriskey notes. "In a statement to The Washington Post, a USDA spokesman said they discontinued publishing the Georgia dock price 'when data from the source report could not be independently verified.'” Whoriskey writes. "Any bias in the Georgia Dock would have had huge effects on consumers. The Georgia dock price is frequently used in contracts between chicken producers and supermarkets and those prices, in turn, could raise or lower what supermarkets charge consumers."

"Over the past two years, the Georgia dock price has drifted significantly apart from other chicken price averages, rising about 20 percent out of line with a separate index maintained by the USDA," Whoriskey writes. "A deviation of that magnitude could have cost U.S. grocery consumers billions of dollars extra." Officials at the Georgia Department of Agriculture said they are reviewing processes for calculating data, but said they are confident in the figures provided to them. (Read more)
Written by Tim Mandell Posted at 11/09/2016 08:52:00 AM