Trump's victory has collapsed peso, which could lead to increased immigration from Mexico

President-elect Donald Trump has pushed border security along the U.S./Mexico border as one of his top priorities. But one of his other policies could actually lead to increased immigration from Mexico, Max Ehrenfreund reports for The Washington Post. "Trump has proposed a punitive tariff of 35 percent on imports from Mexico. The fee would limit American demand for Mexican goods, causing a contraction in the Mexican manufacturing sector and reducing employment for Mexican workers. Many could come here instead."

"A tariff would affect the exchange rate in ways that could increase immigration," Ehrenfreund writes. "Investors have sold off pesos during the campaign in anticipation that a Trump administration could reduce their value by restricting trade. The price of the currency has plunged 11 percent just since Trump's election and has declined 18 percent over the past year, from 6 cents to fewer than 5 cents per peso." (Post graphic: The Mexican peso has collapsed since Trump's victory) 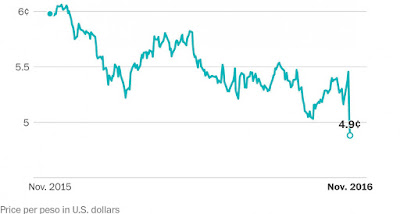 That decline means "that the same hourly wage in the U.S.will be worth substantially more in Mexico," Ehrenfreund writes. "Work in the U.S. has become more remunerative for people in Mexico who are considering emigrating. Also, the increase in cost of imported goods in Mexico will have some households looking for more money in order to make ends meet. Meanwhile, those who are already here have more of a reason to stay, since their wages have become that much more valuable to their families at home." (Read more)
Written by Tim Mandell Posted at 11/11/2016 10:35:00 AM