Hillary Clinton won the largest cities in Michigan, North Carolina and Pennsylvania. But overwhelming support for Donald Trump most everywhere else in those key swing states, including large support in rural areas and small cities, and that was the difference in those states and the election, Bill Bishop and Tim Marema report for the Daily Yonder.

In all three states the final tally was close, with Trump winning Pennsylvania 51 percent to 49 percent, North Carolina 52-48 and Michigan 50.2-49.8. "In North Carolina, Trump won everywhere except in major metro areas of 1 million residents and up," Bishop and Marema note. While Clinton beat Trump in metro areas 52-48, Trump made up the difference everywhere else, winning 61-39 in rural areas and 63-37 in micropolitan counties areas, which have a city of at least 10,000 but none with more than 50,000 residents. (Yonder graphics) 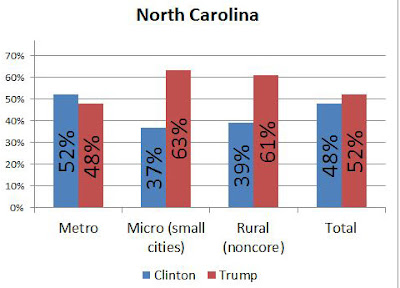 "Pennsylvania tells a similar story," Bishop and Marema write. "There, Trump won comfortably in all categories of counties except ones in major metropolitan areas of 1 million residents or more – places like Pittsburgh and Philadelphia. In those major metro counties, he stayed within 3 points of Clinton and quickly made up that gap in the rest of the state." Trump easily won rural areas, 77-23 and micropolitan counties 70-30. 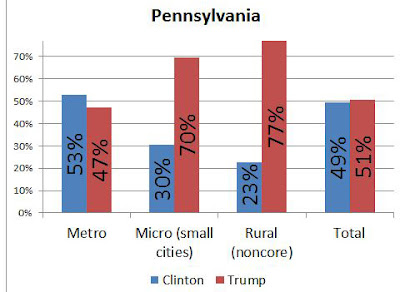 "The story in Michigan was a bit different," Bishop and Marema write. "There, Trump seized a razor-thin surprise victory primarily because of lighter turnout. Clinton received 325,000 fewer votes than Obama did in 2012 – more than enough to have bested Trump’s lead, which was under 15,000 votes on Wednesday afternoon." Overall, Clinton won metro areas 53-47, but Trump won rural 67-33 and micropolitan 61-39. 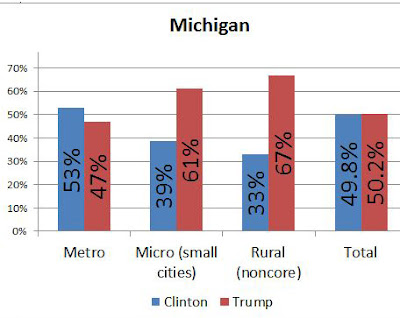