The Environmental Working Group and Waterkeeper Alliance have issued photographs showing how Hurricane Matthew flooded North Carolina hog-farm lagoons, releasing pollution into streams.
"According to the two groups, the flood waters partially submerged 10 pig farms with 39 barns, 26 large chicken-raising operations with 102 barns, and 14 manure lagoons," Dan Charles reports for NPR. "According to Brian Long, a spokesman for the North Carolina Department of Agriculture, the floods killed about 1.8 million chickens and 2800 swine. The damage apparently was much less severe, however, than during Hurricane Floyd, in 1999, which killed more than 20,000 hogs. During that storm, dozens of manure lagoons were flooded, and at half a dozen locations, the lagoon walls failed, allowing the contents to flow away. Following the 1999 floods, the state of North Carolina bought out 42 different hog farms that were located in particularly flood-prone areas, closing down hog farming at those locations. The state also imposed a moratorium on construction of new manure lagoons. That moratorium remains in place. Waterkeeper Alliance and the EWG, however, say that there still are too many animals in the state's coastal plain, and that the state should more tightly regulate where and how that wasted is stored or spread on fields."

Here's a map from the two groups, based on state data, of confined animal feeding operations and 100-year floodplains in eastern North Carolina (click on image for larger version): 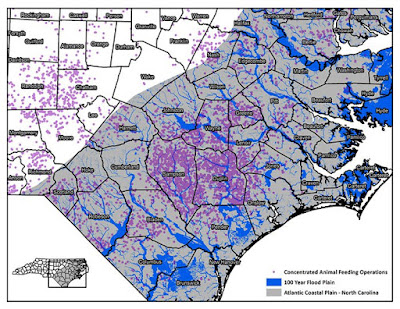