Tomorrow is deadline to register for Covering Substance Abuse and Recovery journalism workshop in Ashland, Ky. 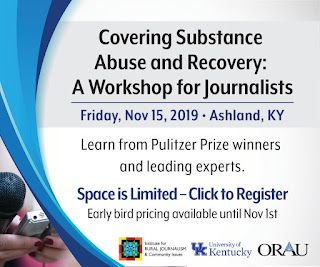 Tomorrow, Nov. 8, is the deadline to register for Covering Substance Abuse and Recovery: A Workshop for Journalists, to be held in Ashland, Ky., on Nov. 15. Space is limited. Details and registration are here.


The workshop will be held at the Marriott Delta Downtown from 8:30 a.m. to 5 p.m. Nov. 15. Early arrivals have an informal gathering at the hotel the night before, and a special room rate of $109 is available through today. The registration fee is $60.

Cross wrote, "As we planned this workshop, I thought of one of the best-known lines from the play Death of a Salesman: 'He's not the finest character that ever lived. But he's a human being, and a terrible thing is happening to him. So attention must be paid. He's not to be allowed to fall into his grave like an old dog. Attention, attention must finally be paid to such a person.' Let's pay attention to these people and their problem, and help solve it."
Written by Al Cross Posted at 11/07/2019 12:24:00 PM