A Creighton University survey of rural Midwestern bankers in October found a cautiously optimistic outlook, with the overall Rural Mainstreet Index climbing slightly above growth-neutral, its highest reading since January. The index ranges between 0 and 100 with a reading of 50 representing growth-neutral. In September the overall index was 46.9, but this month's was 53.2.
The index is a survey of bankers in about 200 rural communities with an average population of 1,300 in 10 states where agriculture and energy are critical to the economy: Colorado, Illinois, Iowa, Kansas, Minnesota, Missouri, Nebraska, North Dakota, South Dakota and Wyoming.
"Recent improvements in agriculture commodity prices, federal farm support, and the Federal Reserve’s record low interest rates have underpinned the Rural Mainstreet Economy. Still, more than one-third, or 35.5%, of bank CEOs reported their local economies were experiencing recessionary economic conditions," reports Creighton economist Ernie Goss, who does the survey.
One banker said that politicized misinformation about a coronavirus vaccine has led many locals to say they won't get the vaccine when it becomes available. Failure to achieve a high vaccine rate, and therefore control the spread of the coronavirus, will hurt economic recovery, the banker told Goss.
Other findings of interest in this month's survey: 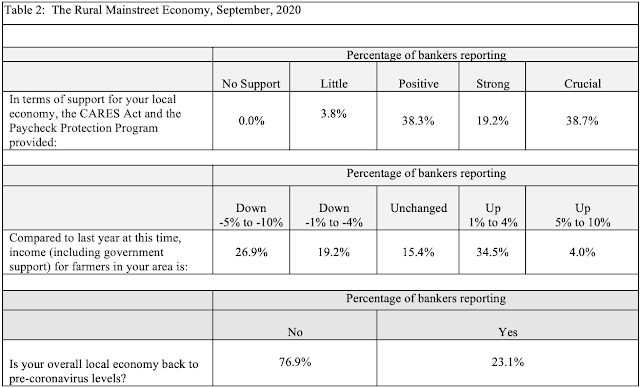