Race a factor in Obama's numbers in Ark. and Ky., but it's any guess how much; coal a factor in Ky.

President Obama's "underwhelming" performance in Tuesday's primaries in Arkansas and Kentucky prompted Chris Cillizza of The Washington Post to write in his blog, The Fix, about the causes. Many "who closely follow national politics . . . ascribe the underperformance by the incumbent to a very simple thing: racism," Cillizza writes, adding that few of them will attach their names to the observation.

Exit polls in 2008 indicated that somewhere around 10 percent of white voters in the two states voted against Obama because he is black. There were no exit polls this week, but that factor surely remains, but four years have passed, Obama is president, and other factors have arisen, such as his positions on coal, which probably hurt him in Kentucky -- and in West Virginia, where two weeks ago a prison inmate got 41 percent of the vote, about what Tennessee lawyer John Wolfe got in Arkansas. 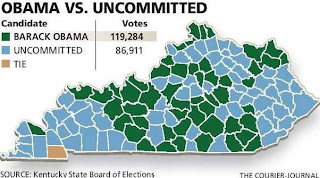 "Of 28 counties in Kentucky where there are active coal mines, Obama lost to 'uncommitted' in 18, including the five largest coal producers — Pike, Perry, Hopkins, Harlan and Letcher counties," Joe Gerth reports for The Courier-Journal of Louisville. Most of those five counties are strongly Democratic but voted against Obama in the 2008 general election.

Cillizza cites other polling data and concludes, "President Obama’s race probably is regarded as more of a negative politically in Appalachia and portions of the South than it is in other regions of the country," but "figuring out how much of the anti-Obama vote in these southern and Appalachian state primaries is directly attributable to racism simply can’t be done." (Read more)

“There’s no easy or simple answer,” Democratic pollster Cornell Belcher told Cillizza. “One man’s racial differences is another man’s cultural differences.” Obama's endorsement of gay marriage may have been a factor, for example. Still, Cillizza writes, “What we know beyond a shadow of a doubt is that Appalachia and portions of the South — particularly those states without large African American populations — have long been hostile to President Obama.” And he dredges up The New York Times' map of counties that voted more Republican in the 2008 presidential election than in 2004 — a belt running mainly from southwestern Pennsylvania to the Oklahoma panhandle.
Written by Al Cross Posted at 5/24/2012 04:13:00 PM