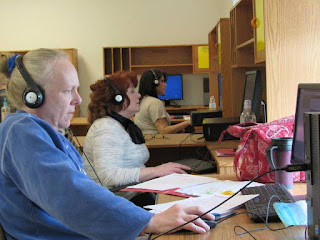 "Teleworks USA employees train people in computer and customer-service skills during a course that lasts from three to four weeks and also helps them polish résumés and get ready to interview for jobs," Estep writes. "The trainees receive several certifications covering customer service and sales, digital literacy and work ethic, which boosts their value to potential employers, said Betty Hays, operations manager for Teleworks USA." She told Estep, “They’re getting someone who knows what they’re doing. They’re trainable, they’re intelligent and they’re willing to work."

The program uses a $200,000 grant from the Appalachian Regional Commission to equip hubs set to open soon, Estep writes. "Teleworks USA provides equipment and staff at the hubs, but communities must provide a space and pay for utilities and Internet service. Officials in other cities have expressed interest in having a teleworks hub."

An initiative of Peoples Rural Telephone Cooperative was one of the key reasons Teleworks USA has been so successful, Estep writes. "The co-op, which serves Jackson and Owsley counties, put together $50 million in grant and loan financing to lay fiber-optic lines throughout its territory, said Keith Gabbard, the general manager. That means every home and business in those counties has access to Internet speeds of up to one gigabit per second, or 1,000 megabytes per second, Gabbard said. The average speed in the U.S. in early 2015 was 11.7 megabytes per second, according to a company called Akamai that tracks Internet speeds." (Read more)
Written by Tim Mandell Posted at 3/14/2016 01:12:00 PM