As social media drive audience for national news, local news and its media are shrinking

News is increasingly being reported and read through social media, with focus more on national news reported by tech-savvy reporters with limited journalism skills, Kathleen McLaughlin reports for The Guardian. A 2016 study commissioned by Nielsen and the Knight Foundation found that Americans are twice as likely to access news through smartphones than newspapers.

Tom Rosenstiel, a Brookings Institution fellow who founded and ran for 16 years the Project for Excellence in Journalism at the Pew Research Center, told McLaughlin, "The real crisis in American journalism is not technological, it’s geographic. The crisis is that local journalism is shrinking. I wouldn’t say it’s dying but it’s the most threatened. There is so much more national and international news available to people, it has changed what people are interested in. (During the election) I saw clear and distinct evidence that people were consuming more national news and less local.” (Statista graphic: Number of daily newspapers has declined in U.S.) 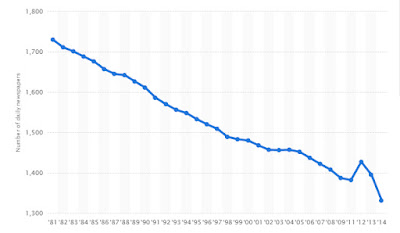 "Local and regional newspapers across the U.S. have bled cash, staff and readers, and in the process lost much of their authority as watchdogs and influencers," McLaughlin writes. "In the wake of the most divisive presidential election in recent memory, and the midst of many hand-wringing treatises on the state of journalism, we’ve somehow overlooked what happened with local news, the place where most Americans used to get the bulk of their information."

"The scaffolding of American journalism, a basic bulwark in our apparently delicate system, is crumbling," she writes. "In its place, we’ve been left with a vacuum that filled easily through the presidential campaign and into today with Donald Trump’s bombastic, often racist and sexist reality-TV-style rhetoric and antics."

The American Society of Newspaper Editors reports that the number of people employed full-time in newsrooms has declined from 56,900 in 1990 to 32,900 in 2015, McLaughlin writes. "Most of these missing newsroom employees were not working at the national newspapers where our post-election journalistic worries have fixated. They toiled in local and regional newsrooms, in the teams that long covered often mundane but critically important workings of cities, towns and states. Newsrooms and state bureaus are decimated, and staffed with younger, cheaper talent – equally stretched and hard-working but missing much of the institutional knowledge and confidence critical to successful journalism."

"Today, with overworked and stretched staff and vastly shrunken news holes, we have entered a new, sinister era," she writes. "Papers are smaller and their content is more limited, less nuanced. Older journalists who know their beats sometimes better than those they cover have been shunted aside, in favor of lower-paid reporters who use Twitter and Instagram well, but lack foundations in history and investigations." (Read more)
Written by Tim Mandell Posted at 2/20/2017 12:51:00 PM