DEA seizes billions from people never charged with crime; they must prove innocence to recoup assets

More than 80 percent—$3.2 billion—in assets seized by the Drug Enforcement Administration from 2007 to 2016 was taken from people who were never charged with criminal activity, says a report by the U.S. Department of Justice's inspector general.

Cash seizures have dropped dramatically since then-Attorney General Eric H. Holder Jr. in January 2015 "issued an order that eliminated most opportunities for state and local law enforcement to use adoptive seizure to avail themselves of federal forfeiture and related equitable sharing proceeds," the report found. (DOJ graphic: Cash seizures from 2007-16.)

"The seizures are all legal under the controversial practice of civil asset forfeiture, which allows authorities to take cash, contraband and property from people suspected of crime," Christopher Ingraham reports for The Washington Post. "The practice does not require authorities to obtain a criminal conviction and it allows departments to keep seized cash and property for themselves unless individuals successfully challenge the forfeiture in court." (Value of cash seizures by department) 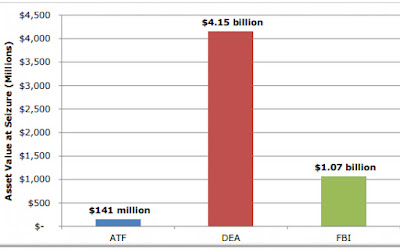 Critics "say this creates a perverse profit motive, incentivizing police to seize goods not for the purpose of fighting crime, but for padding department budgets," Ingraham writes. "Law enforcement groups say the practice is a valuable tool for fighting criminal organizations, allowing them to seize drug profits and other ill-gotten goods." Ingraham notes that people who have had money seized often don't fight it, because of high court costs, which sometimes amount to more than the amount seized.

The report found that "the Department of Justice 'does not collect or evaluate the data necessary to know whether its seizures and forfeitures are effective, or the extent to which seizures present potential risks to civil liberties'," Ingraham writes. The report said: "When seizure and administrative forfeitures do not ultimately advance an investigation or prosecution, law enforcement creates the appearance, and risks the reality, that it is more interested in seizing and forfeiting cash than advancing an investigation or prosecution."
Written by Tim Mandell Posted at 3/31/2017 09:04:00 AM