At 100, Nebraska newswoman keeps on reporting 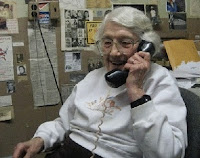 Mildred Heath's journalism career began at Linotype machine in 1923, and she has been on the job ever since. Last Friday, she celebrated her 100th birthday at her office, the newsroom of the Beacon-Observer in Elm Creek, Neb., reports Paul Hammel of the Omaha World-Herald (who also took the photo). Heath is a former co-publisher of the Beacon- Observer, and is now the 1,400-circulation weekly's correspondent for the town of Overton.

"Today, Heath may well be the oldest working journalist in the country, said Allen Beermann, executive director of the Nebraska Press Association," Hammel writes. "A National Newspaper Association official offered no contrary evidence, and Internet search found one contender, Dina Sundby, who was a correspondent for the Hillsboro (N.D.) Banner until her death at age 97 in 2003."

Heath's career began when she worked the Linotype machine for the Curtis (Neb.) Enterprise, and she still carries the burns from the machine's hot lead. In 1938, she founded the Overton Observer with her husband, Blair. In 1948, they bought the Elm Creek Beacon and later merged the two papers. Today, Heath works five days a week at the Beacon-Observer answering phones, filing photographs and writing an "Overton News" column.