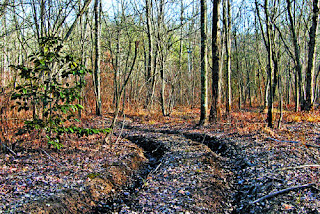 Building trails for all-terrain vehicles in national forests and other public areas would attract adventure tourism and reduce ATV-caused erosion and other damage to natural areas, like that shown in the photo by Richard Jessee of The Coalfield Progress of Norton, Va., according to advocates of a trail system in the Appalachian Mountains of Kentucky, Virginia and West Virginia.

Jack McClanahan of Big Stone Gap, Va., told Wise County supervisors last week that "plans are in motion for Southwest Virginia legislators to introduce General Assembly legislation that would create an authority to oversee a proposed system of trails tailor-made for each recreational use," reports Jodi Deal in the Progress. “If ATV trails are established, it would take a lot of pressure off of nature trails,” McClanahan told the supervisors. “We can’t just turn our back on ATVs and hope they go away. We can regulate them.”

"According to McClanahan, a similar project in West Virginia, the Hatfield and McCoy Regional Recreation Authority, has drawn plenty of people and money into the counties it covers. . . . Those with specialized hobbies will pay top dollar for a good trail experience, McClanahan added, noting that a friend who rents horses and mountain bikes to trail enthusiasts estimates that mountain bikers spend about $300 per day when visiting a destination.

In Harlan County, Kentucky, where ATV tourism is popular and a regional trail system is also planned, "an enthusiast was recently asked to guide a group of 14 tourists from Vermont around his hometown hills," Deal reports, citing McClanahan. "Each tourist paid $50 for the 12-hour trip, he added." (Read more; subscription required) For a recent Rural Blog item on ATV damage to national forests and other federal land in the West, click here.
Written by Al Cross Posted at 1/08/2008 03:56:00 PM