"Thousands of Kentuckians are in danger of literally eating and lounging themselves to death," Ben Gish of The Mountain Eagle in Whitesburg reports from this week's Kentucky Diabetes Solutions Summit. In another weekly newspaper's story published about the event, Edmund Shelby of The Beattyville Enterprise wrote, "Lee County holds the second worst percentage of the prevalence of diabetes in Kentucky, according to the Kentucky Institute of Medicine."

The Institute for Rural Journalism and Community Issues made personal invitations to the newspapers serving Kentucky's 20 most diabetic counties to attend the summit, and six sent their editors or reporters. Also attending was a reporter from a county that has a low diabetes rate but lots of people living unhealthy lifestyles, the reporter told us.

The summit was designed to focus attention on the state's high incidence of diabetes and ways to address it -- including news-media attention that can help those in danger of developing diabetes life healthier lifestyles and avoid the disease. This is a big problem for America, where 21 million people (7 percent of the population) have been diagnosed with diabetes and 54 million are considered at risk for it -- and may already have it. In Kentucky, the rate is 10 percent, and in some counties it is around 15 percent.

For more from the summit, including remarks by keynote speaker Newt Gingrich, shown below with the journalists, click here. 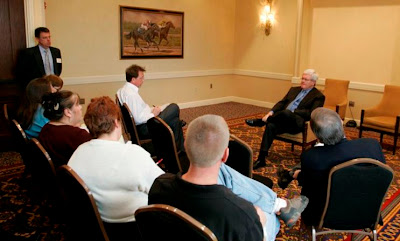