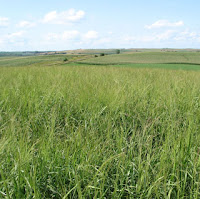 When it comes to producing ethanol efficiently, switchgrass stands out. A new study in the Proceedings of the National Academy of Sciences finds that the prairie grass (at left in a U.S. Department of Agriculture photo) delivers 540 percent more renewable energy than the energy consumed in growing it, including fertilizer and its production, a point on which it has a clear advantage over corn. In addition, the use of switchgrass as biomass has environmental benefits such as reduced greenhouse gas emissions and increased soil conservation.

The study b the University of Nebraska "clearly demonstrates that managed switchgrass production systems have the potential to produce significantly more energy than is used in production and conversion," its authors write. Switchgrass has additional appeal since it does not require great farmland to grow. "Switchgrass is a good crop for marginal crop lands," Ken Vogel, a co-author of the study, told Timothy Gardner of Reuters. "Corn is still going to be grown to make ethanol; whether it ever takes a chunk of crop land away from corn is all going to come down to economics." Cellulosic ethanol now costs about twice as much as that produced from corn, but advances in the breakdown of cellulose could bring costs down, Gardner reports. (Read more)

At Iowa State University, John Verkade and his colleagues are trying to turn a 40-year-old discovery into a breakthrough for cellulosic ethanol production. For the past 40 years, Verkade has told a funny story about one of his Iowa State University students who thought a classmate might be swiping his lab materials. Today, that story could be the key to breaking down switchgrass and other plant material cheaply, ISU's Mike Krapfl writes.

On that day in the 1960s, Verkade's student, David Hendricker, discovered that his missing wooden applicators actually were being broken down by the chemical compound he was studying. Verdaker and Hendricker sought a patent, but it got lost in the shuffle until recently when another university professor, George Kraus, thought the compound could have a role in ethanol production. Verkade has since followed up with a proposal for U.S. Department of Energy funding. Verkade (on the left in photo by Bob Elbert) won a two-year, $125,000 grant and enlisted the research help of Reed Oshel (on the right in the same photo), an Iowa State graduate student. So far, they have had success using the compound to break down cellulose. Verkade says more research needs to be done, specifically to see how the compound might fit into the fermentation process. (Read more)
Written by Tim Wiseman Posted at 1/09/2008 11:40:00 AM