"Across the U.S., the number of horses whose owners won't or can't properly care for them is mushrooming," Paulo Prada reports for The Wall Street Journal. "Spurred by retiring baby boomers and their penchant for second homes in the country, horse ownership boomed in the U.S. over the past decade," to over 9 million head, up by half in a decade. "Along with the boom came backyard breeding, as owners without the discipline or financial muscle to obtain award-winning genes settled for whatever nature produced."

"As the horse population soared -- and the economy ceased to gallop -- selling the animals became more difficult. Some owners could no longer afford their investment. . . . The price of hay, the main source of horse nutrition, has more than doubled over the past year," but at the same time the last three horse slaughterhouses in the U.S. closed, exacerbating the situation. "Now, some unwanted American horses wind up at Mexican and Canadian slaughterhouses. But others linger and starve, often ending up at rescue homes and other charities." 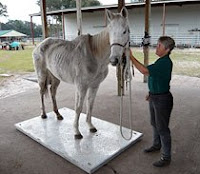 "You've got all these owners out there who thought it would be easy to keep a horse, and their incomes aren't keeping up with even their own cost of living," says Morgan Silver, founder of the Horse Protection Association of Florida (which provided this photo of her with Princess, a horse she rescued). She works around Ocala, "a hotbed of mateur breeding," Prada writes. The Indiana-based Equine Rescue League, which operates in five states, says it took in 186 horses in 2007, up 232 percent from the previous year. (Read more)
Written by Al Cross Posted at 1/07/2008 08:21:00 PM

Re. "Unwanted" horses
To the Editor:
I recently came across a notice in the Journal of the American Veterinary
Medical Association about the "unwanted" horse issue, which was encouraging
readers to visit their website and read "Frequently asked questions about unwanted
horses and the AVMA's policy on horse slaughter" for answers to commonly asked
questions about horse slaughter. The answers provided are heavily biased in
favor of the AVMA's pro-slaughter position. For example, it is stated that
upward of 100,000 horses per year are unwanted (the inference being that they
must be disposed of by slaughter) - but there is no relevant data to support this
statement. The number of horses slaughtered has fluctuated between 350,000
and just over 40,000 over the past 18 years 1,2 and bears no relationship to the
number of "unwanted" horses, equine abandonment or cruelty reporting. Even at
today's relatively modest slaughter rate of around 100,000 horses per year,
the number of these horses that is unwanted is not known with any certainty
(the AVMA admits this, but continues to press the number as fact). It is known
that some of the slaughtered horses are stolen, some are obtained under false
pretenses by unscrupulous individuals responding to ads in tack and feed stores,
etc, some are obtained from advertisements in equine magazines and newspapers
("wanted to a good homes") while yet others are bought at sales by so-called
killer buyers who have the incentive to outbid the competition. Also, it is
not the unhealthy, broken-down nags the slaughterhouses are in search of;
according to the USDA over 92% of horses slaughtered are neither old nor unhealthy.
In addition, the FAQ would have you believe there is an issue with disposal
of equine carcasses. Approaching 14,000 cows die or are put down each year on
farms in New York State alone.3 Try multiplying that number by 50 (states) and
note that the landscape is not littered with bovine carcasses. Rendering,
composting, and burial are a few of the ways that large animal carcasses can be -
and are - disposed of.
Let's face it; slaughter only exists because the horse slaughter industry
makes money from it, supplying gourmet markets in Europe and elsewhere. The fact
that the AVMA has chosen to align itself with these business partners is of
great concern. A website championed by the AVMA - commonhorsesense.com (also
known as the Horse Welfare Coalition) - was originally purchased by a lawyer,
John Linebarger, who was employed by the Texas slaughterhouses Beltex and Dallas
Crown. The site and group4 are now jointly used by the AVMA DC lobbyist Dr.
Mark Lutschaunig together with slaughterhouse lobbyist Charlie Stenholm and the
PR firm SciWords. Note that the slaughterhouses in Mexico (and Canada) where
AVMA-acknowledged equine atrocities are ongoing are owned and operated by the
same groups funding those behind the website. It seems unwise for an
organization comprised of what should be informed medical professionals to be strongly
influenced by industry organizations with a business agenda counter to the
ethics of our profession. For what we believe is a more accurate, balanced and
more humane counterpoint on equine slaughter, visit
_http://www.vetsforequinewelfare.org/_ (http://www.vetsforequinewelfare.org/) .
Nicholas H Dodman, BVMS MRCVS , Diplomate ACVA and ACVB
Westborough, MA
Footnotes:
1. USDA's National Agriculture Statistics Service:
_http://www.nass.usda.gov/Statistics_by_Subject/index.asp_
(http://www.nass.usda.gov/Statistics_by_Subject/index.asp)
2.
_http://www.awionline.org/legislation/horse_slaughter/horse_slaughter_statistics.htm_
(http://www.awionline.org/legislation/horse_slaughter/horse_slaughter_statistics.htm)
3. Natural rendering: composting livestock mortality and butcher waste.
Cornell Waste Management Institute, 2002 pp 1.12 _http://cwmi.css.cornell.edu/_
(http://cwmi.css.cornell.edu/)
4. House Plan to End Horse Slaughter Shortsighted: AVMA
_http://www.avma.org/press/releases/060908_horse_slaughter.asp_
(http://www.avma.org/press/releases/060908_horse_slaughter.asp)

There seems to be some confusion regarding these two, one and the same, organizations and their stand on horse slaughter. To clarify:

The American Horse Council's official stand on slaughter is:

"AHC Position
The AHC is neutral on the legislation because it has organizations and individual members both supporting and opposing a federal legislative ban."

Although previously statements declared that they were in favor of slaughter, the current membership of AHC contains organizations which are both pro and con on the slaughter issue. Nevertheless, if some feel that they need to affiliate with them due to the mistaken impression that AHC /UHC are anti-slaughter, please refer to the AHC list of members.

It is somewhat enlightening to refer to the section for AHC Members, then cross reference it to the list of members for Common Horse Sense/aka Horse Welfare Coalition/aka slaughterhouse web site, (commonhorsense.com domain previously registered to attorney for Texas slaughterhouses, now listing contact as SciWords, the PR firm for the slaughterhouses).

If the chain of association still seems cloudy, refer to the list of Current Unwanted Horse Coalition Member Organizations. The first four on the list are very actively pro slaughter. Also, reference JAVMA, August 15, 2006 where a news release was published in the AVMA Journal as the start up of UHC was initiated. AAEP/AVMA was instrumental, and both organizations are quite openly in favor of horse slaughter.

There are no praises to be sung for UHC as related to the slaughter issue. Elsewhere, perhaps there are, but not here. If someone is considering donating dollars to them, it would be better spent in assisting horse rescue.

One of the greatest disservices to equines was closing the slaughter plants. Horses that went to slaughter went for about $0.60 per pound 'on the hoof.' That's about $600 for a 1000 lb average adult horses. If a horse can't bring more than that - it generally is old, unsound, untrained to ride, or dangerous. Now there is no place for the 65,000 unwanted horses to go and they face starvation, abuse, and the possibility of horrific injuries is abandoned loose.

While no one 'likes' slaughter, the stark reality is that horses are livestock not a house pet and removing a way to handle excess, unwanted equines is causing more problems for horses than it solved.

Any one know of a horse rescue with a business plan? We are looking for one to give us the basics - if you know of a rescue that has had to take the time to provide a business plan that would be willing to share can you post the name here?