At least implicitly, a reported 32 ministers across the country backed Republican Sen. John McCain of Arizona for president yesterday, "hoping to generate a legal battle that will prompt federal courts to throw out a 54-year-old ban on political endorsements by tax-exempt houses of worship," reports Peter Slevin of the Midwest Bureau of The Washington Post. "The ministers contend they have a constitutional right to advise their worshipers how to vote." 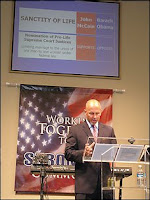 "Their opponents contend that the tax laws are essential to protect the separation of church and state," Slevin writes. "They say political speech should not be supported by a tax break for the churches or the worshipers who are contributing to a political cause." The 1954 law says that to remain exempt from federal income taxes, non-profit organizations may not "participate in, or intervene in . . . any political campaign on behalf of any candidate for public office."

UPDATE, Sept. 30: Conservative syndicated columnist Cal Thomas responded to the effort, saying that politicized sermons are a poor substitute for what worship is intended to be. He writes, "Churches and ministers would do better to keep their attention focused on things above, rather than the things below, because politics can be the ultimate temptation and pollute a far superior and life-changing message."
Written by Al Cross Posted at 9/29/2008 06:39:00 AM

You might delve into it a bit and find that a church is not your run-of-the-mill nonprofit group.

It is a non-profit by default -- though that is, IMHO a not so good thing. Can you find even one single case where a church has lost its tax-exempt status for supporting a candidate?

I'll take my answer off the air.