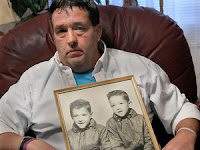 The brother of a miner killed in the Upper Big Branch explosion is speaking out about his family's grief so that the victims are not forgotten. "Eight months after the Upper Big Branch mine disaster, the families of the 29 coal miners who lost their lives continue to live in grief, yet few have described their pain publicly," Howard Berkes of National Public Radio reports. Gene Jones, whose twin brother Dean died in the explosion, says keeping the tragedy in the public eye is important. (Photo by F. Brian Ferguson for NPR. Gene Jones holds a mid-1960's photo of himself, right in photo, and his brother, Dean Jones.)

"We're just going to be forgotten," Jones told Berkes, while mine disasters are "going to continue and continue and continue to go on. We need it fixed." He pointed out that in the national outpouring of support following the disaster, "They mourn for you, and it's unbelievable how this nation came together. But if [we] don't speak out and continue to speak out, it's just forgotten." Gene's mourning turns from grief to anger when he considers Dean's complaints he made about safety at Upper Big Branch. "Alice Peters, Dean's mother-in-law, testified in a congressional hearing in Beckley in May that Dean had been threatened with dismissal seven times because he resisted putting his crew in danger," Berkes writes.

Because Dean's insurance provided for his 14-year-old son with cystic fibrosis, "Dean needed his job to make sure his son could get the medical care he needed," Peters testified. Gene noted that in the eight months since the explosion that killed 29 miners, Congress has rejected mine safety reform, the investigations of the explosion drag on, and Massey Energy retiring CEO Don Blankenship will receive at least $12 million, four times the amount of the settlement that Massey offered his family.

"It's so sad to hear these crazy things," he told Berkes. The miners "were there every day risking their lives for that black coal, for us, surviving in this country. And because of that, I lost my brother." (Read more)
Written by Jon Hale Posted at 12/14/2010 04:16:00 PM