Three years ago Eastern Oregon University was on the brink of collapse. This fall enrollment hit a record 4,137 students. School administrators say the key to the turnaround  focusing on recruiting rural students, Bill Graves of The Oregonian reports. "We are a rural university," President Bob Davies, who arrived on campus in July of 2009, told Graves. "We serve a group that is unique to us." Eastern Oregon draws more than half its campus from east of the Cascades, an area that "is bigger than Florida and nearly the size of all of Washington, yet it contains only 529,100, or 14 percent, of Oregon's people," Graves writes. 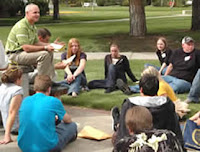 Three years ago, "Eastern's reserves were drained, its enrollment had dropped, its relations with the community had soured, faculty and staff morale was in the tank, the president had just resigned, and some members of the State Board of Higher Education were asking whether they should just close the university," Graves writes. Today, after focusing on helping rural students succeed at Eastern by making the university more accessible, affordable and personally engaging, foundation leaders are launching a campaign to triple the school's endowment, Graves reports. "It is about connections," Davies said. "When we have that strong connection, we thrive." (EOU Photo of first year students)
"To stay affordable, Eastern continues to charge the lowest tuition and fees -- $6,639 a year for a full-time undergraduate student -- in the state system, and it charges no more for out-of-state students," Graves writes. "Its foundation has launched the first phase of a campaign to raise about $12 million, which would triple its $6 million endowment, primarily to provide students more financial aid." Eastern Oregon has also had success with off-campus learning. "Only about half of Eastern's students attend college on campus," Graves writes. "Another 2,200 mostly rural students take classes and earn degrees online through 16 centers scattered across Oregon." (Read more)
Written by Jon Hale Posted at 12/14/2010 03:21:00 PM