In bid for precedential ruling, Massey challenges feds' authority to seize mine it is closing 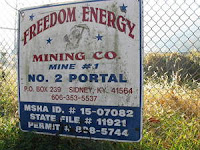 Even after announcing it would permanently close its Freedom Mine No. 1 in Pike County, Kentucky, Massey Energy is moving ahead with a legal attempt to block the Mine Safety and Health Administration's move to close the mine for repeated safety violations. "A landmark federal court hearing Friday ... could determine whether the toughest mine safety tool ever used is as tough as it appears," Howard Berkes of National Public Radio reports. (NPR photo by Berkes)

"Massey has already announced it will close the mine, but it does not argue in its motion that its voluntary shutdown makes the case moot. It doesn't even mention its intent to close Freedom for good. That may be an indication that Massey wants to make a strong statement with a court decision that could effectively kill the option of going to federal court again to force mine operators to comply with safety regulations," Berkes reports. The "injunctive relief" option that allows MSHA to close a mine for repeated safety violations has been on the books for 33 years but has never been used. The agency's action "is part of the Obama administration's purported get-tough response to the deadly explosion at Massey's Upper Big Branch mine in West Virginia in April," Berkes notes.

"MSHA needs to have the authority to go to federal court, and get the court to require mine operators to address continuing hazards or face contempt of court," said Ed Clair, who spent two decades as the chief lawyer for MSHA until his retirement last year. Massey argues in its motion that the Labor Department's case is based on "vague and conclusory assertions that fail to inform the court of any plausible basis for shutting down the Freedom No. 1 Mine." Massey argues many of the citations, violations and fines are common in the industry and are not final until an administrative law court considers them. (Read more)

Berkes' reporting on Massey in the wake of the April disaster that killed 29 West Virginia coal miners was recognized by The Hillman Foundation, which honors the memory of labor leader Sidney Hillman, with its monthly Sidney Award. "The fine detail of Berkes’ work and his determination in staying on this story was critical in keeping the issues fresh in the minds of all those involved in the process of mine safety reform," award judge Charles Kaiser said. In addition to recognizing his NPR colleagues, Berkes "acknowledged his journalistic debt to Ken Ward Jr., the dean of American mining reporters, who runs Coal Tattoo, the definitive mining Web site of The Charleston Gazette," The Hillman Foundation says. (Read more)
Written by Jon Hale Posted at 12/17/2010 02:24:00 PM