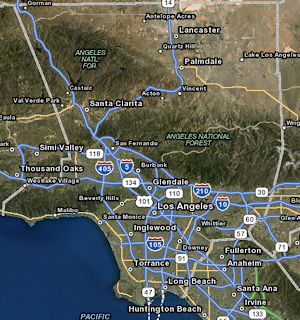 The Los Angeles County Board of Supervisors is considering new regulations that would preserve the dark night skies of rural areas of the vast California county. "The new zoning rules would establish standards for outdoor lighting for those unincorporated neighborhoods," the Pasadena Star-News reports. The issue is not limited to Southern California; most of America's rural residents live in counties that border metropolitan areas. "Dark night skies are one of the many qualities that set rural areas apart from urban and suburban communities," says the proposal from supervisors Michael Antonovich and Zev Yaroslavsky. (MapQuest image; county line in light gray)

"Many jurisdictions across the nation have adopted zoning standards for outdoor lighting to preserve and enhance valuable dark night skies, to lessen the impact of development on native wildlife, and to reduce energy consumption," the proposal notes. Among the complaints from rural residents was a horse farm owner who installed lights that "impacted the entire valley," the Star-News reports. "Light travels," Tony Bell, spokesman for Antonovich, said. "It can be bothersome. This is aimed at improving the quality of life for anyone who appreciates sunsets and star-gazing." (Read more)
Written by Jon Hale Posted at 12/16/2010 03:24:00 PM