Rural jobs up, jobless rate not down so much

Two-thirds of rural counties saw an increase in jobs between October 2009 and October 2010, but unemployment rate dropped just one tenth of a percent from September 2010 in rural, urban and exurban counties. The national rural unemployment rate stood at 8.8 percent in October, slightly less than the national rate of 9 percent, Bill Bishop and Roberto Gallardo report for the Daily Yonder. "Generally, the rural communities that were hit the hardest by the recession initially show the greatest decline in unemployment rates over the last year," Bishop and Gallardo write, pointing to the Carolinas, Alabama, Tennessee, Indiana, Ohio and Michigan as examples. 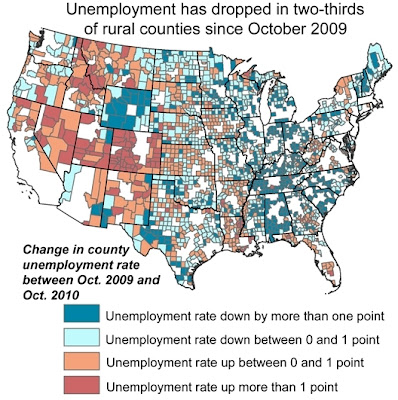