Mississippi, North Dakota and Hawaii among states that benefit most from earmarks 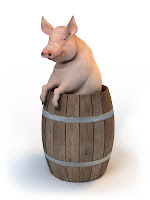 Republican victories in November could mean the end of budget earmarks. Limiting pork will affect some states more than others, and rural states may be among the bigger losers. "Hawaii and North Dakota had more earmarks per capita than any other state in 2010, including Alaska and West Virginia, according to separate rankings from Taxpayers for Common Sense and Citizens Against Government Waste, two watchdog organizations," Pam Prah of Stateline reports. (Stateline illustration: iStockPhoto.com)

The biggest loser if earmarks are limited may be Mississippi, which "pulls in 11 times as much in earmarked funds as it sends back to Washington in taxes, according to an analysis from Brandon Arnold, director of government relations at the Cato Institute, a libertarian group," Prah writes. The University of Southern Mississippi recently received a half million dollars worth of earmarks for its cannabis eradication program, which is designed to help law enforcement officials detect indoor marijuana growing operations. That money was "tucked away in the federal Commerce, Justice and Science appropriations bill for fiscal year 2010," Prah writes.

"These states will still get federal funds" if an earmark ban goes through, said Steve Ellis, vice president of Taxpayers for Common Sense, "but no doubt about it, they will get dinged." Earmark supporters say a ban would "would rob lawmakers of their authority to set the spending and taxing policies of the nation, relinquishing it to the executive branch," Prah writes. Both sides of the argument agree a ban on earmarks is symbolic; they account for only about 1 percent of federal spending.

"Critics questioned the GOP's resolve to curb earmarks after House Republicans selected U.S. Rep. Hal Rogers of Kentucky to head the House Appropriations Committee in the next Congress," Prah writes. "Some in Congress call Rogers, who is credited with winning some 135 earmarks for his district, at a cost of $246 million over the past two year the 'Prince of Pork.'" Rogers, however, has spoken out in favor of the earmark ban. he represents the nation's most rural district, covering most of Appalachian Kentucky. (Read more)
Written by Jon Hale Posted at 12/13/2010 03:02:00 PM