UPDATE 12/15: A Gillespie County jury sentenced Fuelberg to probation and a $30,000 fine. "The jury's sentence does not state a term of probation, to be determined by state District Judge Dan Mills in January," Patrick George of the Austin-American Statesman reports. "In remarks from the bench, Mills suggested Fuelberg might have to pay $84,000 in restitution , and serve jail time as a condition of his probation." Fuelberg's attorney said he was pleased with the sentence and Assistant Attorney General Harry White added the verdict "sends a powerful message to the community that people in positions of trust will be held accountable for their actions when they violate that trust." (Read more)

The former manager of the nation's largest rural electric cooperative, who resigned two years ago, was convicted Friday of theft, money laundering and fiduciary misapplication of property, all third-degree felonies that could cost him two to 10 years in prison and $10,000.

Bennie Fuelberg, 66, now faces sentencing by the Gillespie County jury that reduced the charges from first-degree felonies. He was accused of "funneling hundreds of thousands of dollars in co-op members' money between 1996 and 2007 to his lobbyist brother" and the son of a former Pedernales Electric Cooperative board member, Patrick George of the Austin American-Statesman reports. 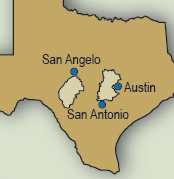 The utility came under scrutiny after customer-members member sued it in 2007, leading to "disclosures of large salaries, excessive expenditures and money-losing ventures at the co-op, which Fuelberg ran with little oversight by the well-compensated board of directors," George writes. "A reform movement" purged the entire board, Fuelberg and other officials. "Today, the co-op has levels of openness unheard of during Fuelberg's tenure, including democratic board elections and more open records." (Co-op map shows its service areas)

Co-op member Andy Wilson of Public Citizen Texas said the verdict is a warning. "This should send a chill down the spine of other corrupt co-op boards and managers across the country," he told the Statesman. "We can take back our co-ops, as we've done in Pedernales, and so can others across the country." (Read more)
Written by Al Cross Posted at 12/12/2010 11:21:00 PM